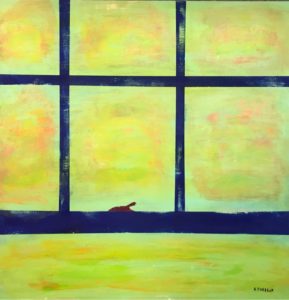 Before there were smartphone screens to stare into, children looked out the window, their eyes portals for real but mostly imaginary scenes.

Cars passing, dogs chasing squirrels, a neighbor mowing. Raindrops, snow flakes, the falling sun, a full moon. Millions of kids saw all that if they were lucky to look out windows at all, in peace.

A day off from school, maybe in a snowstorm, perhaps a hot summer night trying to catch a breath of air at the windowsill, the ledge the edge of a stage for whatever was happening.

Usually, ordinary things were taking place — still do at the window. Even mundane. Seen before, so many times. Yet reaffirmation in that as ordinary living continues.

Continues even in boredom, and that was — is — where the window truly could open up. How many noses have been pressed to glass, how many chins have rested on the sill as Acts I, II, III took to the footlights? How many fantasies were seen? How many fake battles? How many romances, wishes, journeys into any neverland?

A window is one place to get a ticket to ride. There are others.