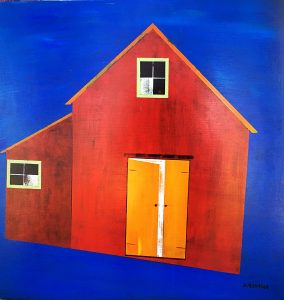 In Nyack, N.Y., just a few hundred yards from the great historic river named the Hudson, the shores of which will soon be joined by two new bridges to replace one just 62 years old, stands a small barn so classic in shape and so reminiscent of who and what built the nation that it makes you purr, the world’s troubles be damned.
Those new spans across the river named for Hendrik, an explorer without GPS who by default continued New World exploration and so helped fuel the endless frontier that was once America, should not be necessary. The Brooklyn Bridge, just miles south on the East River takeoff, was earnestly erected in 1883 and remains in heavy use — people, vehicles, trains. The 1955 Tappan Zee Bridge is falling down, and millions have been spent each year to prop it up.
The crossing will be allowed to collapse later this year when the first new span opens to the exaggeration of politicoes and much fanfare, just like in 1955. But no one will speak of the first and poorly built structure and why it has withered while great-great-grandpa still stands talk with no evident arthritis.
And so, back to the Nyack barn, old school, too, maybe 1883 as well. Surely not 1955.
It stands, still.
The first Tappan Zee Bridge cost $81 million, or about $800 million today. The Brooklyn Bridge — $15.5 million in 1883, $386 million in 2017. The TZB replacements? An estimated $3.9 billion. Yes, “billion.” And that does not include inevitable renovation and widening of the Rockland County Thruway lanes, now a bottleneck that will not see relief with two wider crossings.
The barn? Not sure what it cost back when. Probably a few hundred dollars in locally harvested and milled pine plus the labor of willing neighbors in a picnic raising.
Like I said, the barn makes me purr. Not sure about the new bridges at Nyack. Or the old one.

The writer is a retired newspaperman. ahgunther@hotmail.com