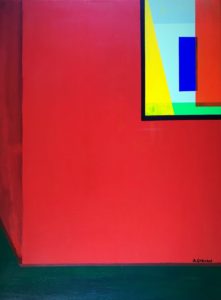 A recent painting, “Abstract on a Red Wall,” came about because what I had on the canvas was not working — there was nothing there that told a story or suggested one. The colors could not stand on their own. The form, the line, had no structure that beckoned. It wasn’t frustrating because it was just media and paint and a missing ingredient — inspiration. It wasn’t the end of the world.

I had other things to do: take a walk, watch a favorite British do-it-yourself show (amazing how the English build with older techniques and tools), maybe eat a donut or just chill.

The eventual rescue, and rescues usually do come, was in letting go. The painting did not have to get done, not that day or week or month. I wasn’t earning a living at it; it wasn’t going to be recognized as exceptional. It wasn’t going to complete my soul. I would not have dreams about the painting.

Letting go did the trick. Whatever mundane tasks I went off to complete, whatever time spent doing not much of anything, chilled me enough to return to that particular canvas.

In its execution, I soon found I was painting a wall, with the hint of a hallway to the left. The work itself became largely red, much like the hue you see in a Piet Mondrian (though hardly approaching that artistry).

The upper righthand corner of the piece soon included part of a second painting, a painting within a painting, an abstract of various colors and angles in its own frame.

There — the work was done. There was “color field,” predominant red but other colors, too, that stood on their own. Yet there was a story as well, suggested by the hallway, the angles in the painting, the overall look.

It was, in its very own small way, art imitating life. The hallway was my walk-out from the original painting that was not working. The angles were the this and that which I did away from the work. And the red, so much of it, was renewed zest.

A small thing overall, just a time in the life, affecting no one but affirming existence. We have all been there.