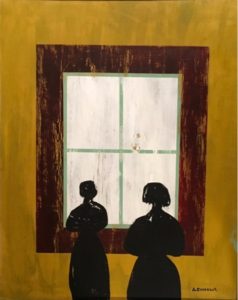 These two women are in Thomas Jefferson’s Monticello home. One is white, prosperous. One is black, African-American, a slave. Presumably, they speak to one another.

They are at the dawn of a new age, this political, social, economic, human experiment called the American republic, in which “all men are created equal.”

But not blacks, still slaves. Not women. Not Indians, Native Americans, increasingly dispossessed of their ancient lands in the continuing march of “progress” and manifest destiny. Not the coming waves of immigrants, from whom most of us descend. Not the elderly. Not the addicted.

The women at the window in 1800 see beyond the Virginia landscape toward a frontier hardly begun. If they were seers, they would also see violence, bloodshed, prejudice, crooked politicians in special interest, human abuse even as the ever-proud, ever-changing flag of a new, emerging nation goes forth, held high, but just for some.

They know, these two women then of unequal standing, but each unequal to men, that there is already proclaimed justification for the ceaseless frontier and its mistakes as well as its achievements, in the very language of the revolutionary men who by the skin of their teeth won independence. “Toward a more perfect union,” the Preamble to the Constitution reads. There is no second line: “Yet progress must not be so rapid that people are bulldozed aside.”

The women who stand at this Jefferson window, in the home of the brilliant man who employed his mastery at writing to set the nation’s mission statement but who was also a slaveholder and flawed as leaders are, these women of the nurturing sex in 1800 are in place today, challenging an incomplete march to achieve equality, not only for females but for men, for all races, for the poor, for the forgotten middle class, for immigrants, for the sick and the infirm, for those shoved aside one way or another.

They will not long remain at the window of 2019 and beyond. They will go forth and become the masters of the American republic’s true manifest destiny. Their time has come.

The writer is a retired newspaperman. ahgunther@yahoo.com, Facebook Messenger.