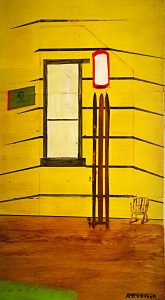 In the tucked-away room, in the original attic, was a very tall radiator and a very small rocking chair where the ghost, quite friendly, dwelled much of the time, looking out the long window or seeing through herself in the mirror high above the radiator.

No one saw the ghost except Ginny’s grandchildren, who, not yet educated away from imagination, knew no boundaries in flight and fancy. In playtime, in alone-time, one or two or three would run up the stairs and into the tucked-away room and exist with the ghost.

It wasn’t that conversation was exchanged with the ghost, not back and forth-like, but that things, thoughts, feelings were understood. It was like Winnie the Pooh and Christopher Robin, the imaginary world in which a fortifying foundation for the coming rigors of adulthood can be built.

The ghost, this friendly non-being, not in the world but also not out of it, was as real to the youngster(s) playing in the tucked-away room as were apple juice and brownies. The children were not afraid, for they had not yet been taught that, and the young are simply accepting.

Ginny, though well-grown and having lived a long life of responsibility, had come to a time when the rhythm was slower and she could again hear the music of her own childhood. And, so, she put together the tucked-away room in the attic of her Clinton Avenue  home, with a very tall radiator and a very small rocking chair.

She knew, as surely as she saw the curtain drawing, that her own reality would become something else, perhaps akin to that of unfettered childhood. Ginny herself might enter the tucked-away room and know the ghost, too.

Her grandchildren were never in doubt there, though the door would beckon as adulthood neared, and Ginny would enter as they departed.