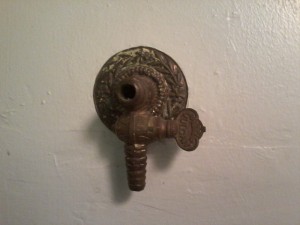 It had to be pre-World War I when the Edward Hopper House in Nyack, N.Y., still had no hot water, relying instead on a rubber tube connected from a gas jet in the bathroom wall to a small bunsen burner. Water for shaving, washing-up was heated in that way. As the late Yogi Berra said, deja-vu happens “all over again,”  and that was my experience yesterday at the birthplace of the foremost American realist painter.

Serving among the many volunteers over the decades since the house was rescued from tear-down by concerned Nyackers and others, I was working in the 1894 bath on small electrical repair. When the original home was built by Hopper’s grandfather in 1858, bathroom facilities were non-existent, as was the norm. In the early 1880s, just after Hopper’s birth in 1882, a series of renovations brought a first- and second-floor addition, and that included the first bath.

The original clawfoot tub and marble sink are still there. Most likely there was no true hot water in 1894 unless the just-added kitchen had a small boiler and hot water heater attached in a Rube Goldberg-like piping setup from the wood stove.

Nyack was just getting its gas piping then, from a coal gasification plant on Gedney Street near the Hudson River. Gas was delivered a few hours daily for lighting and cooking. Hopper House was fitted with gas connections, and that included one for a bunsen burner in the bath (pictured above this essay.) Edward’s father, and then the artist himself, who lived in the house until his late 20s, surely heated shaving water with the burner.

The deja-vu part comes with the work I was doing yesterday. There is an original electrical fixture (the home was converted from gas lighting to electrical about 1920), and the wiring needed repair. That included soldering. I ended up plugging in the iron next to the gas jet, and as I worked over the old sink where the bunsen burner was used, I realized I was again introducing heat into that area, first time in a century. The soldering completed, I finished the electrical work and was soon on my way.

Deja-vu aside, it’s cool enough if you can spend time in the same space where a famous person washed-up and did the ordinary things ordinary people do.

The writer is a retired newspaperman who can be reached via ahgunther@yahoo.com

4 thoughts on “DEJA-VU AT THE EDWARD HOPPER HOUSE”