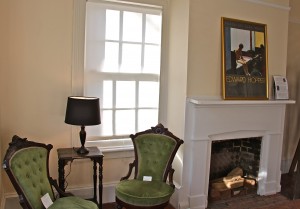 82 North Broadway, Nyack, N.Y. — When you paint in a great artist’s childhood bedroom, in space where the Hudson light seems a direct path from Heaven, off the river and straight up Second Avenue, you are humble. Humble even if you are simply covering a wall with latex, part of a sprucing-up after a fairly serious renovation.

Recently, I was the artist in an artist’s bedroom, not doing artist’s work but trying to be artistic. I am a trustee of the Edward Hopper House Art Center and, along with Lynn Saaby, Dave Sirois and Brian Levine, we of the House & Grounds Committee try to offer as much volunteer repair work as possible. Giving free labor, and, often, materials, has been the secret of success in affording maintenance of the 1858 house where Edward Hopper, the famed American realist painter, was born in 1882.

Ever since the once-deteriorating home was rescued by concerned citizenry and refurbished largely through volunteer work in the 1970s, the mantle has been passed from crew to crew to keep the iconic village structure in top shape. While these days that cannot always be accomplished with just volunteer expertise and labor, and focused fund-raising is necessary for infrastructure concerns (such as the ongoing drive to waterproof the basement), Hopper House continues to rely heavily on what labor and materials can be offered. I have been privileged to be among the volunteers, all of us taking cues from Win Perry, the Upper Nyack historian and architect, and his original 1970s restoration crew.

Those volunteers and early trustees saw to rewiring, heating, structure and wall repair, flooring and other work so that the art center could begin to offer space for artistry of all design and taste and to honor Hopper as as well as to rescue an old Nyack house. The mission continues more than four decades later.

For whatever reason, a portion of Edward’s childhood bedroom, a particularly sunny part of the house on the southeast side, was never fully repaired. A long-ago water leak had deteriorated the original horse hair plaster on wood lath, and the wall on the south side, including the fireplace surround, had been removed down to the full-size 2×4-inch balloon framing, made of locally milled wood and which runs from the basement sill to the roof line.

Over the years, the bedroom had been rented to various artists to help supplement Hopper House income, and those painters did not mind the rustic nature of the exposed wall, which included Haverstraw brick infill for mass and early insulation.

Last year, the room was taken off the rental list and opened up to visitors eager to see Edward’s bedroom, where most likely he was conceived as it was the master bedroom until just after his birth when an addition was put on the north side.

Hopper House decided then to complete the long-overdue repairs, which was to include new wall work,  period molding, improvement of the fireplace hearth and paint. I got the job, and this volunteer spent about two weeks wonderfully enjoying the tasks.

Each day, and some nights, it was inspiring to see the effect of both sunlight and moonlight in the room and to again realize that Edward, whose paintings are so very much about light, was obviously affected by constant nature in his bedroom. The birth of a great artist took place in this room, literally and figuratively.

Repair work was made easier by a large table, perhaps 4 feet by 12, which Edward built in his Washington Square, New York City, studio to dry printed black and white line drawings from copper plate etchings. (Hopper House was given the table by Edward’s neighbor after the man, a professor, retired a few years ago. He had received it from Jo Nivision, Edward’s wife and fellow painter.) I was careful not to damage the rustic oak table, and it sure came in handy.

The wall repair was quick enough, using drywall and a finish that mimics plaster. The moldings required extra work since we had to match them with what might have existed, or at least come close. I mixed this and that profile and hand-milled some pieces to achieve the desired result.

In the end, the restored wall fits the original bedroom, itself the inspiring scene of several Hopper paintings. It may not be perfect, for I am but a volunteer craftsman, but I took pains to respect the house and the artist.

No, I did not channel Edward Hopper, which might seem a temptation, especially when you are in the bedroom at 8 a.m. on a bright, sunny day and the light streams up Second Avenue through the large windows and onto the walls. But neither can you ignore the fact of his existence, his childhood and early adulthood in that room. As a writer, photographer and painter, I can call myself an artist, though that definition bears no resemblance to artist Edward Hopper. Yet if there is kinsmanship at all, it was a bit brotherly to be working in the great man’s bedroom.

The writer is a retired newspaperman who long toiled for the original Journal-News at 53 Hudson Ave., Nyack. This essay recently appeared in the newsletter of the Nyack Historical Society. It may be reprinted.

2 thoughts on “EDWARD HOPPER AND ‘PAINTING’”