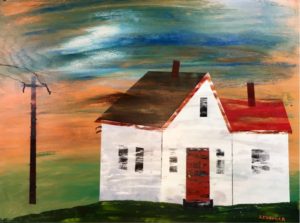 There is music in this old house, though there is no electricity — disconnected decades ago. There is no radio, no record player, no iTunes. In fact, there are no people.

But once, even before electricity, there was much music. Fiddles, banjos, carved wooden sticks offering the cadence of Irish/Scot heritage but in a new land. So, added notes.

And there was the music of children, the best sounds in any home. And the whistling of the father as he whittled, a respite from the long day’s hard work. The women had their tunes, taught by mothers whose mothers taught them — music with a survival rhythm, deep graciousness, and reference to the glory of the Kingdom and what follows lifelong nurturing, endurance.

The writer is a retired newspaperman. ahgunther@yahoo.com, Facebook messenger.