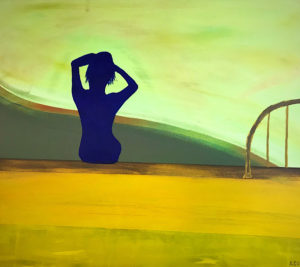 Many painters don’t title their works or provide only cryptic ones, perhaps  because they do not know what the pieces say, preferring that their “language” speak for itself. Maybe even tell the artist what “it” means. And, besides, it may be in the eye of the beholder anyway.

Is a painting ever finished?

Take this piece. I can offer various stories for my “Woman on the Stairs,” as can anyone.

When I paint, I usually do it from a “flash” — something I’ve seen quickly, on the street, in a film, in a magazine or on social media. It’s like writing these columns. A flash of thought comes, and I build a narrative. In that, as in my newspapering days, I “make deadline” and move on to the next cycle. Some of the output is better than others, as are newspaper days. It all gets done — and forgotten. Wrap the fish in newsprint.

Since I am trying to get better at painting, I usually post an image for comment on Facebook and Instagram. Typically receiving a handful of replies, some prove critical, which is great. Humility can be a kick in the rear, but it is instructive. After the wounds are licked.

And the comments show varied interpretation, which is also great.

For example, the painting with this column had some viewers seeing a woman on the edge of a bed, not the top of stairs; one said it was “racy,” to which I replied, “Hope so” since the physical is present in everything; “She looks like she can’t take it any more” offered another viewer; a “non-political piece about pure beauty,” said another, and yes, the woman is beautiful, as all women are; and “alluring.” Yes, that too. What woman isn’t if you care to find out?

My take is that the woman in the painting is just thinking, in quiet, in her space. She’s happy. You can fill in the blanks should you care to.

The writer is a retired newspaperman. ANY COMMENT TO: ahgunther@hotmail.com