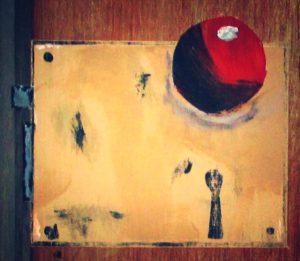 I don’t suppose people use keys to lock bathroom doors anymore, but in downtown Nyack, N.Y., one very old mortise set was stirred to life for perhaps the first time in more than 100 years.
As a volunteer at the Edward Hopper House, the birthplace in 1882 of the famed American realist artist, I was tasked by two concerned staffers with securing a door on the original bathroom, no longer used. They need it temporarily for archival space, and the room must be locked.
I was going to add a small, really non-invasive bolt latch that could be removed but was stopped — literally blocked at the bath door — by Carole Perry, the artistic director, and Jill De Vonyer, Hopper House archivist. Since I rarely seek to encounter the wrath of women (that comes anyway, without trying), I stared ahead, awaiting instruction, a long-ago-learned defensive move.
“You are NOT going to make holes in this old door, are you?” were the unspoken words as the eyes of Carole and Jill darted. I think I mumbled something about there already being a thousand pecks and blemishes in the still-unfinished though stained fir door, a standard 1880s building item.
That was when Jill, diminutive though she may be in height, focused on me as a laser would, or perhaps as a cat annoyed because it has not been fed on time. Carole, meanwhile, stood ground in the hallway with no retreat in mind.
“Ah,” I said, again in tactical defense. “I see this door has a mortised key lock.” (A mechanism set inside a hollowed-out section.) “Maybe I can take it out and make it work.” I could already hear the purring from the archivist and the director, so wonderfully protective are they of Hopper House, along with Jennifer Patton, the executive director, Joyce Byrnes and Ursula D’Auria in the office,  the trustees and the many volunteers over more than four decades.
The lock, common on inside doors back in the day, operates with a simple, “skeleton” key, turning a chunk of metal (mortise) that goes into a strike plate and tenon space on the door jamb.

The old mechanism came out easily, and as was also common back in America’s industrial age, the lock was made so that it could be quickly disassembled. I was able to clean the ancient dust from inside and lubricate the lock with the small tube of Vaseline I carry for dry hands, etc.
Back the thing went, a skeleton key was procured, and we had a working lock. All that was needed was Dave Sirois, also on the House & Grounds Committee, to add a strike plate from his collection as a contractor and old-homes restoration expert.
I hear Carole and Jill are pleased. I can relax because I did not incur wrath. Hopper House has been protected. And we can all say cheers for old-style American hardware that endures into its third century.

2 thoughts on “KEY TO A SUCCESSFUL JOB”