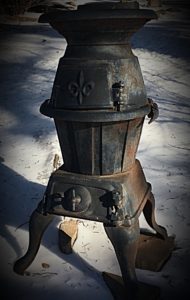 It is one degree in Blauvelt, N.Y., as I write this piece, unusual cold these days in this part of the Northeast not far from New York City but reminiscent of old winters.
In that time, though, cars did not start easily, coal furnaces had to be hand-stoked, hoping that the fire did not dissapear from the embers banked the night before, and my female schoolmates waited for buses wearing required dresses, their poor legs red from the biting cold and wind.
And that was just 50 or so years ago. Imagine back another half century with horses to saddle, wood cooking stoves to refill and a long walk to school.
So, the moment is relative, as it always is, and even without a frame of reference, say the 20 year old who knew not the world in 1968, you can appreciate some of modern technology, at least if you can afford it. Or if you are not homeless, as too many remain in this rich nation.
On this one-degree day, a Sunday in Blauvelt, there was not many errands, so no multiple trips about. Just a cozy day inside, and thanks for that. Thanks that I was not my grandfather putting coal ash on the driveway for a gritty surface. Thankful that I wasn’t my great-grandmother milking her cow at 6 a.m. And grateful that I wasn’t my triple-great-uncle responding to a fire call with a steam-fired pumper.
Yet I was thankful for a bit of nostalgia thrown my way in the cold. When I was five, living in nearby Sloatsburg, the rented house on Seven Lakes Drive had no central heating, just a large grate in the hall off the living room that sat above a hand-fed gravity coal furnace. On very frigid mornings my brother Craig and I would get dressed standing on that grate, hopping from one foot to another since the metal got hot.
Now, in 2018, that memory was reawakened on the one-degree morning when, after rising at 5:30, I brought down clothes, threw them in front of the gas fireplace, started the fire, and when it was putting out heat, got dressed in front of the fireplace. No foot-hopping this time, though.