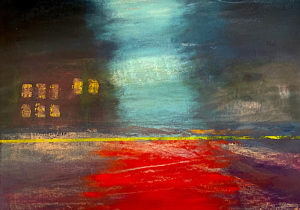 The painting accompanying this essay is titled “Storm” and is a reworked piece following the tumult of 2020, now spilled into early 2021. It is, despite the movement and color, a work of hope.

The painting is based in part on “Lydia,” the 1941 Merle Oberon film that refers to an earlier French movie by director Julien Duvivier. The film is set in flashback and looks at the five men in never-married Lydia MacMillan’s life. It features a windswept house by a stormy sea where one love affair was set to sail but never anchored.

The film affected me in several ways,  particularly the emotion of the seashore house surrounded by churning waters and high winds. A port in a storm.

Then came January 6 and the invasion of the U.S. Capitol, and again we saw a storm but in the end, the lights stayed on and the historic place of democracy, last assaulted by the British in 1812, endured. Another port in a storm, however challenging the moment.

So that’s how a painting came to be.

The writer is a retired newspaperman.