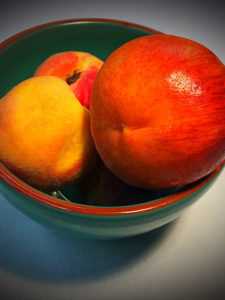 A peach in season is like long-sought love that suddenly makes connection.  The heavens appear, but as in many a novel and short story, consumption does you in, spoils you for the ordinary. You can love no more past this time.

Until the next season.

It isn’t Adam and Eve here, forbidden taste of the fruit that brings guilt and addiction. The peach in season, freshly picked at maturity, never ripened as a green orb by gas in a truck or rail car from this place or that, is like the magical confluence of things out of this world when the tingle, heart patter and goose pimples of human bonding strike as lightning.

You are hooked for the moment. You do not question why this peach is so full of nature’s best taste, why the skin has a snap never arrived in the ordinary supermarket variety, picked weeks ago. You simply savor rich sweetness that almost makes you cry, humbles you so in the process that you thank your god or your lucky stars. You are filled with satisfaction, and that keeps the tank supplying until the next year.

Once, in this region called Rockland, the smallest New York county geographically outside Gotham’s five boroughs, tree-ripened peaches were the norm. But post-World War II development took most farms and some of the greatest fruit ever grown, given our particular climate and glacially derived rocky soil. Now, there are but a few farms, like the Concklins, the Davies family, the Van Houtens and others in the Rockland Farm Alliance, such as Bluefield, Duryea, Pfeiffer Center, Stony Point Center. In their place is what is an insult: stores in all too many highway strips on old farm land that, with some exception, sell peaches from states far away, perhaps wonderfully tasting in their own element, had they ripened there, but not in Rockland as gassed creatures that are so grainy inside that you must throw them away, even after you have paid dearly a pound in “season.” You had hoped, but. …

No, I await the homegrown, larger fruit that like the lover you recognize in the dark, has its own scent. For a few weeks there is this affair that has you coming back and back for more, even moving you to tears, for no man-made sweetness is comparable to a fresh peach, the skin of which produces a snap at first bite that is exquisite foreplay.

Once your time is finished, you will have to move on, for the fresh peaches are no more. But that is just fine, thank you. As with the deepest of love affairs, the sort that can be revisited in its season but never sustained in ordinary time, day after day, week after week, you are satisfied so deeply that routine will never do.

You await the next rendezvous. It is worth suspended time.

The writer is a retired newspaperman. This essay is derived from an earlier treatment. ahgunther@yahoo.com