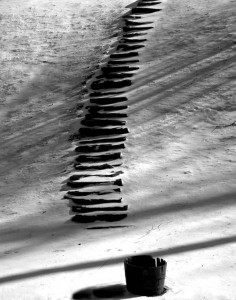 Yet there are differences between the two snow events, and I use that phrase because it is part of the contrast. In 1947, the few media outlets delivering live news would never have reported on a  “snow event,” just a snowstorm. Language often gets inflated when you hype something. And weather is a most-hyped event in this age of instant news via smartphone, tablet, computer and ever-repeated TV segments.

Yes, the snowstorm that hit my area in lower New York State was big enough, though on my mailbox indicator, it was slightly more involved than average. I have lived at my Blauvelt address since 1973, and we have had a few storms that almost buried the mailbox, which is about 3.5 feet off the ground. This system came up about 1/3 the way. And while some had high winds, we did not. A big storm, but not the biggest.

From all the hype the four days before, you would have thought the earth was heading out of orbit. There were Facebook pictures of empty shelves in supermarkets. Governors were warning they would close roads, which they did (states south of New York, never ready for a big snowstorm since they are rare, ran into trouble. Even the president’s motorcade was held up in the D.C. snow.)

The 1947 newsreel indicated that millions of dollars were spent or never realized in cleanup costs and lost business. And, of course, there were associated injuries, even deaths in the storm. Truly sad. But in 1947, there was little hype about the coming snow. It came quickly, the day after Christmas, and common sense got everyone as prepared as they cared to be. Kids enjoyed the extra holiday present (including my brother and I, then living in Sloatsburg, N.Y.).

But I don’t think bread flew off the store shelves or gas stations had lines with motorists fueling up as if rationing would soon begin.

It’s now a faster-paced world, and “news” has the shelf life of a few seconds. Hype seems the only way to get people’s attention.

It’s paternal pride, but I think my son Arthur IV had the best take on the 2016 “snow event.” Interviewed by FIOS One (Verizon) TV News while he was running in the storm on Broadway in Nyack, he was quoted: “This is New York. It is supposed to snow.”

Yes, and no one had to hype that.