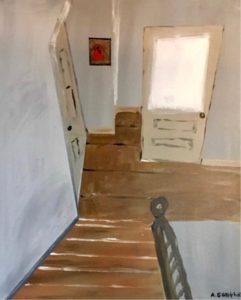 One room, two very different windows, each of individual color and particular perspective. But they co-exist./gunther painting

This virus stay-at-home has brought back childhood memories of being in the house an awful lot in the summer though building forts in the ever-present woods of a countryfied New York area and taking walks in the cooler parts of day were also routine.

Yet the house was a sanctuary. It was quiet, which to me is daily sustenance. It afforded lots of moseying time to let your imagination run its little legs off, and that happened for me when I stared out the window, usually the one in the south-facing living room during the day and the attic sash at night. Both views included Karnell Street cars passing by, which though a fast route between two major roads, never had much traffic. Quiet.

So, the imagination liked that, the quiet, assured that it could take you on a journey of nothingness, which, of course, can be everythingness.

You read a book, and you are into imagination land, encouraged and narrated by the writer and illustrator. Stare out a window, and you are the author. Works either way.

Chose a different window, even in the same room, and there’s different fantasy, originality, perspective.