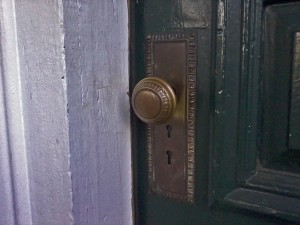 Reaching for the 1800s front door knob at the Edward Hopper House the other day, the Nyack home of the famed American realist painter, it occurred that perhaps more than a million turns to that piece have happened in the nearly 158 years it has been on North Broadway.

There would have been Hopper’s grandparents, the Smiths, who built the house. Then his parents Elizabeth and Garrett as well as sister Marion. Hopper himself, who was born in 1882. Then so many relatives, visitors over the almost 110 years the family had the house.

When the home, in disrepair after Marion’s death in 1965 and Hopper’s in 1967, was rescued by historian and community preservationist Win Perry and many other volunteers in the 1970s, they all touched that door knob.  The house then became an art center and Hopper artifacts museum, and the door has opened to many visitors since. The knob, brass with filigree, has really assumed polish with constant handshakes.

(Now, of course, this story presumes that this is the original door knob, which is reasonable given its design. And, anyway, presumption is good for a story. You get the point.)

Over the decades, if you apply arithmetic at 20 turns per day, 365 days a year, 158 or so years, that’s more than a million turns. Plausible. Many Nyack homes have their original door knobs, and they are still working.

And why shouldn’t they? I have dismantled the Hopper House door knob in regular maintenance, and I report that it is full brass with an adjustable,  threaded steel shank and  screws to hold the knob in place. Two knobs — one inside, one out — are set in brass escutcheons, as you can see from the photo above. Very well-constructed, made to last, a tribute to old manufacturing. And this is not a fancy door knob set.

Consider that a kerosene deliveryman opened the door weekly before electricity came to Nyack and Hopper House in the later 1800s. Then coal gas installers. The telephone guy. Then all the early 20th century  deliverymen — milkman, baked goods supplier, laundry man, etc.

Birthing doctors and midwives turned that knob. So did undertakers. Edward Hopper, when he visited his sister, gave the knob a twist, and who is to say he did not turn the door knob and push the door open with his foot so he could bring in or out one of his masterpieces, now selling for millions?

The tales a door knob could tell — at Hopper House, at your own.

2 thoughts on “TALES OF A DOOR KNOB”