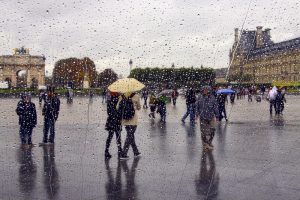 With Paris under recent attack in a discordant world in which bad people exploit differences and legitimate need, in a beautiful city of proud and diverse citizenry, there is a constant hum that cannot be quieted. It is reassuring in the punctuation of bombs and terrorism, in France and in too many other world sites.
It has been a few years since a visit to the Louvre, the national art museum on the Right Bank of the Seine in the 1er Arrondissement, the First District.
A former fortress and palace, the Musée du Louvre opened in 1793 after the National Assembly of the Revolution decided that it should contain masterpieces. That it has and does, despite wars, depressions and the whims of humankind that try to depress the arts. The Louvre itself has benefited from strife, including receiving looted art in the Napoleon era, losing some to the British Museum after Waterloo.
Yet for the visitor trying to escape officialdom and the oft-sorry consequences, the importance of the Louvre or any place of art as to the constancy of culture, history and genius — the better side of life —  is priceless. It is akin to the flag still flying after bombardment.
When I visited in 2012, on a rainy day in which The Inverted Pyramid, the famous 1993 glass addition, was covered with drops that gave an Impressionist’s view of people and place, September 2001 had passed, though the wounds did– have — not, but the terrorism of 2017 was yet to come.
Yet Paris, its people and its famous Musée had already long endured war and the other follies of humankind. Displayed on the Louvre walls and sculpture platforms were proof that not everything is about horror, that the tread of culture cannot be ripped apart.