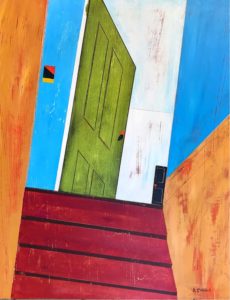 NYACK, N.Y. — Once there was a door at the top of the steep steps in the 1858 birthplace home of Edward Hopper, the foremost American realist painter. It was not there in his childhood, 1887 birth-on, nor did the family need such closure.

The door, rescued from several originals kept in the basement, was attached in the early 1970s rescue of the then deteriorating, once handsome, modest home of a Baptist minister, Edward’s grandfather (John Smith), then his father Garret, a shopkeeper, then the artist himself. Edward passed in 1967, his sister Marion in 1965, and Josephine Nivison, the painter’s wife, also an artist, in 1968.

A door at the top of the stairs was needed in the house renovation so that income-producing space for studio renters and a handyman could be had, assuring that the almost total volunteer effort to save a historic home, that of a famous artist as well, could continue.

In time, the Edward Hopper House was able to open up to the public the upstairs room where Marion, Edward and their mother Elizabeth were born, and so, the door was removed. Visitors to the bedroom are taken by the brilliant Hudson River light that shoots up Second Avenue straight onto the walls. Surely this painter of light was touched from infancy.

Doors give us privacy, guard the quiet. Sometimes — valuable times — they must be closed. In other moments, they should be wide open or exist not at all.

At the Hopper House, now 82 North Broadway, the opened door at the top of the steep stairs gives visitors deeper insight into an artist who never tells the story in his paintings but who opens a door to our own tale(s).