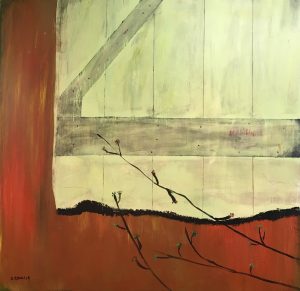 In German, “Einfluss” means “influence,” and so that is how a recent painting gained its name. I was intrigued by a photograph taken by a Deutsche designer and decided to do my interpretation via acrylics and wood. She deserved some credit, and the German title was it.
I am not sure if I could have gotten through life this far or if I can move along the future path without influence. Pig-headedness aside and allowing for the many times when I’m nfluence has been ignored, there is little accomplishment without someone else’s input.
My favorite teachers, and even the one or two who were not on the list, continue to influence me many decades later. For example, when I add numbers and carry the ones, I cannot escape the influence of Miss Margulies, my arithmetic teacher. When I write, which I am driven to do, it is always another weekly composition for Mr. Gram.
My newspaper photography career was influenced by Andy Dickerman, Al Witt and Warren Inglese.
Today, an interest in local history is influenced by masters like Wilfred Talman, Craig Long and Win Perry.
My family, living and gone, influence my actions. The nation and its leaders or, sadly, at times non-leaders, influence a strong belief in the Founders’ vision and the utter necessity to see it further unfold, certainly not to see such promise wither.
Acquaintances of old, such as childhood friends, have their continuing influence, even if they do not know it.
Truth is, the nerve synapses do not work on their own in this body of mine. Each past encounter, many a conversation, a learned lesson, failure, a fleeting glance, a lingering touch, a kiss, a handshake, an act of charity, a heroic moment, all this and so much more are the directional signs in life.
It is gratifying to be under the influence.