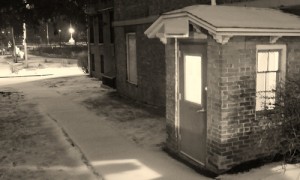 While you cannot go home again, the gods, and nature, can make you think you are in a dream of past time, place. That was my experience Tuesday last when at 2:17 a.m., I rolled into Spring Valley, N.Y., the village of my youth.

It was a snowy morning, the first such in the warmest Northeast December on record. Though where I grew up has changed in appearance, even some function, and so very many of the old storefronts, and, more important, their business people, their customers, are gone, the fresh snow that morning was like the white scene in “It’s A Wonderful Life.” A blanket of white is in metaphor the handmade down comforter on a four-poster bed. It simply evokes the warmth of childhood.

And that’s what I felt, what I saw in my mind’s eye as I drove into the community of my father, my grandfather, my friends, my teachers and some special people. Times, places change, and you may no longer have the keys, but memories can unlock what was yours. Fresh white levels the field, literally, since the color of snow is the universal hue. A snowman, no matter who builds it in whatever age — in front of your house or what was your home — is yours.

It was with a bit of whistle, or the sounds that pass for that from a man without rhythm, that I drove through Spring Valley’s snow, headed to the regular Tuesday gig as a non-profit cook who tries not to poison anyone.

While any Tuesday morning at the United Church is routine — knocking large pots about, getting 15 pounds of pancake batter ready, muscling the ancient oven for baking, opening eight no. 5 cans of soup and bringing flavor to that, plus the myriad tasks that are done so that later Phyllis, Carol, Moucille, Mary Anne, Denise, Elnora, Christine, Olive and sometimes others can add their magic — the snow, still falling and glistening in the streetlights, made the effort festive.

The fact that at this time of year, the homeless in Rockland can participate in the Safe Haven overnight shelter program and not see the snow as an enemy removed any guilt in enjoying the white stuff.

The Rockland Interfaith Breakfast Program, begun in 1985 by a group of clergy of various faiths in Rockland County, has had many volunteers for Monday-Friday  breakfasts in its long, continuous run. There have been numerous snowy days, and not all were as easy to drive in as last Tuesday’s, though the volunteers are tough, and there have been rare times when staff was low.

Whatever motives push a volunteer to his/her task generally stay in the mind, the heart, and, of course, the soul. Volunteers figure they are lucky to do what they can and want no recognition, God forbid. That would redirect the spotlight from the good being done. Yet the rewards are many, and sometimes the gods give a fellow a bonus, as it were, like the Currier & Ives scene of my old hometown on a snowy, early morning. I saw so many on the deserted streets that day, and I had not seen them in decades.

The writer is a retired newspaperman who can be reached via ahgunther@hotmail.com All essays can be reproduced.