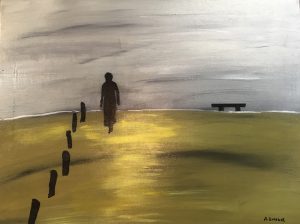 Waterside — it’s an endless frontier, a blank canvas, with the sea’s waves your personal brushes. If a calm, still lake, that’s meditation.
In retirement, people move to homes near water perhaps because the turmoil of life — jobs, raising family, paying bills, etc. — is largely finished, and now, when you look out a window, no longer is it at the car warming up for the daily ride to work but at the infinity of water. It is an unknown, and in that uncertainty, there can be the certainty of some peace.
If a beach visitor just for the day, sitting on a blanket over sand, a strong, comforting sun after a cold winter, the water at a short distance, you may never put your toes in, choosing instead to immerse yourself in a novel or short story. Somehow reading is different at the beach. Imagination meets endless frontier.
Children have their own reaction to water and beaches. It’s a playground, of course, with material for castles and water for splashing and swimming. A day trip is also a family escape for them from the routine, and that can make the return to the ordinary reassuring, even reinvigorating. A sister may still bug her brother, but there might actually be warmth in that, and it, along with the water and beach, will be recalled fondly many years later.
There are always walkers near water, perhaps lost in thought, maybe de-stressing, maybe plotting the next move in life. It is an endless horizon that you look toward from water’s edge.
How many decisions have been made, how many romances left, how many lost ones recalled at waterside? And how much added strength did one bring with them as they turned from the tide and walked back into the world?