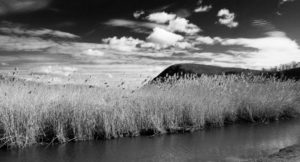 Bear Mountain, N.Y. — I once overheard, in this verdant wonderland of forestation, an earnest fellow say to his four year old: “They call Bear Mountain that because it is bare on top.” Well, it is bare, but that’s not the reason for the moniker. We local hayseeds know that.
This beautiful part of the heavy mountain ranges off the Hudson River, so close to Gotham, is part of the New York State parks system and specifically in the Palisades Interstate Park network. Despite being underfunded for decades (in tougher times, libraries and parks always get the shaft), Bear Mt. State Park, its umbrella the Harriman State Park, and other New York parks in the Hudson Valley region are full of trails, famous stone structures crafted by Depression-era artists, some pools, quite a few lakes and the historic Bear Mountain Inn, itself long-awaiting fuller restoration when the money — perhaps better said, the will— is there. A hotel, cafe, small eating section and trading post are now at the inn.
For decades, at least since the inn’s construction in 1915, we locals have driven to or hiked to or, once upon a time, taken the West Shore Line train to Bear Mountain on weekdays, when the urban crowds were back at work. No complaint about city folk, of course — they help keep the parks going, too, and what a weekend respite, but it’s like when company goes home. You have the house to yourself once again — it is a delight.
Bear Mountain Inn was designed in the Adirondack Great Camps style, and it never goes out of style, literally. Even a poorly done 1970s retrofit with blonde wood, now removed, could not wither the great oaks and other dark woodwork of this monumental building.
My hope is that the Palisades Parks Conservancy, properly formed to aid “the improvement of and activities in the Palisades Interstate Park Commission, and for the purposes of promoting and expanding the preservation of natural, historical, and cultural resources in the Park for the benefit of the public”  will some day be successful in specifically restoring Bear Mountain State Park, its parking lots, its trails, its zoo, its inn, its skating rink and many other features so that the “great masses” will continue to visit — from New York City and beyond and from local communities, too. That is what was intended so long ago in the Teddy Roosevelt-style founding of the parks nationally. May the bears continue to roam at Bear Mt., but humans, too.

The writer is a retired newspaperman. ahgunther@hotmail.com This column is adapted from an earlier piece.

2 thoughts on “BEARS AND HUMANS”