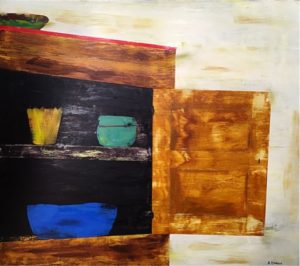 A very long time ago, a young fellow staying overnight at his grandma’s house would get up before his brother so he could put one of those small, individualized cereal boxes on the kitchen table. There might be just one package of raisin bran, and he wanted it.

Every memory of that brings me back to 14 Ternure Ave., Spring Valley, N.Y., and age 5. The home itself, a charming federal/mixed style built in the early 1900s by the Haera family, was inviting for its comfort, and my grandmother made it even more so with her homemade treats.

She kept ingredients, especially spices, in a tallish cabinet at the top of the cellar stairs, where the small cereal boxes were also tucked in. You could not open the cabinet without a whiff of cinnamon, all spice, etc. Just getting near the top of the stairs was enough to make your insides warm in anticipation of something tasty.

Actually, in hope of something more: assurance that life could be safe and secure, with accomplished living ahead. Grandma made it so.

Recalling that cabinet today — its fragrance — renews that assurance.

1 thought on “SWEET SMELL OF LIVING”