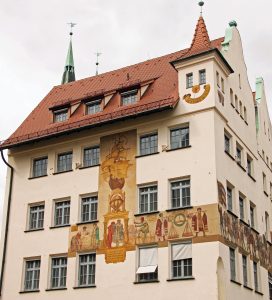 NÜRNBERG, Germany — This once-again beautiful city in the center of Deutschland, removed for more than 70 years now from World War II bombing and almost complete devastation, is both typically German and Bavarian: There is the no-nonsense, can-do, will-do national work ethic and the good and smiling personality of the region. A recent visit while seeing family made me wonder how ever there could have been such disaster here, but also reaffirmed the salvation of humanity in what became the judgment at Nuremberg. Perhaps this visit was a lesson for America today.
Nürnberg, just 110 miles from Adolf Hitler’s populist-energized beginning in Munich, was the “unofficial” capital of the Holy Roman Empire, a once vital trade center and the prime site of the German Renaissance. Its rich history centers not only on culture but on law and legislature, fitting for its role in 1945. The city went to the dark in the huge, mass-emotional Nazi rallies so well captured in Leni Riefenstahl’s  brilliant but chilling 1935 propaganda film “Triumph of the Will.”
Allied carpet bombing took out much of Nuremberg in the war, including most of the medieval city. Yet the Palace of Justice, the Justizpalast, survived, and it was chosen by the Allies for the now-famous Nuremberg Trials. In 1945 and 1946, German officials accused of war crimes and crimes against humanity stood before an international tribunal. Courtroom 600 is still used, fittingly, for murder cases. It was also appropriate that the Justizpalast
was chosen since Nuremberg was where the Nazi Party passed law stripping Jews of their citizenship.
Today, a visit to Nürnberg brings so little of the past to mind. Much of the city has long been restored, though not all of the medieval section. There are public squares where regional produce is sold, restaurants, stories, museums, offices, homes and all that makes for a vibrant community. Life is worth living in this beautiful center, and visiting it and its fine people made me once again proud of my German heritage while also remaining cognizant of its mistakes.
But then we came home, to my country, to an election period unlike no other I have seen. It appeared comical at first, especially with the media (and I am of the media), mining so much of the bizarre but letting the substance slide. Until now. Hope it is not too late.
You cannot return from Nürnberg, from re-watching “Triumph des Willens” — “Triumph of the Will” — without a chill in this U.S. presidential election. The ability to rouse a mass audience using slogans and prejudice and fear, all based on very real concerns (Germany, 1930s: economic woes worsened by war reparations, unemployment; America, 2016: dwindling middle class, poor immigration policy, rich getting richer, all costs rising).
Of such conditions are demagogues born — political “leaders” who rally through false claims, simple promises and argument based on emotion not reason.
Of such times humanity can once again turn into the dark.

The writer is a retired newspaperman who can be reached via ahgunther@hotmail.com This essay may be reproduced.